"We have known for some time that the Irish public is ahead of politicians on climate action. It's been demonstrated by community action opposing fracking and engaging in community renewables, and of course by the Citizens' Assembly. But it is heartening to Irish people to come out as leaders in this comparison of international opinion poll data. "We fervently hope that whatever Government is eventually formed will reflect this public understanding that economic recovery and environmental action can go hand in hand."
As agriculture and transport continue to be contentious issues in the government formation talks, Friends of the Earth also drew attention to the high levels of support for climate action in rural Ireland:

"Too often we hear politicians pitting rural Ireland as against climate action. The poll findings show that just isn't true, with large rural majorities in favour of greater action to cut pollution from transport, housing and farming."Moreover, we are seeing with increasing frequency that farmers are on the frontline when it comes to bearing the brunt of the impact of extreme weather events such as floods and droughts."Farmers and rural communities are also to the fore in developing community energy projects, and we are pushing hard for the next Government to give finally these initiatives the support they deserve."Rural Ireland has more to fear from inaction on climate change than action on climate change and these poll findings show that people in rural Ireland already know that. It's time for politicians to catch up with the public."

[1] The international opinion poll findings come from the IPSOS poll carried out for Earth Day.
The IPSOS UK press release is here: https://www.ipsos.com/ipsos-mori/en-uk/two-thirds-britons-believe-climate-change-serious-coronavirus-and-majority-want-climate-prioritised
IPSOS full report on the poll is here: https://www.ipsos.com/sites/default/files/ct/news/documents/2020-04/earth_day_slide_deck.pdf

[2] The Irish findings are from the recent Opinions Market Research poll of a nationally representative sample of 1,021 adults with a margin of error of +/- 3.1%. That poll asked two questions that were identical to two questions in the international IPSOS poll.
Full poll report here: https://www.foe.ie/assets/files/pdf/friends_of_the_earth_climate_action_opinion_polling_may_2020.pdf 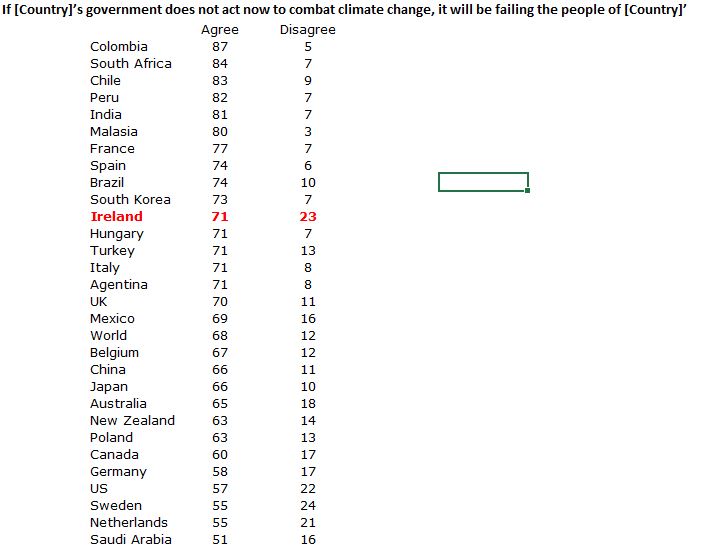