A newly formed alliance of trade unions, environmental and civil society groups has called for the immediate establishment of a national Just Transition Commission to develop an agreed blueprint for the zero-carbon transition, build public support for climate action and ensure that no worker or community is left behind. **Please note - we have extended the deadline for our Campaign Communications Officer and Donor Care & Fundraising Officer roles - applications for these jobs now close at 23.59 on 20th April**

The Friends of the Earth team is growing! We're delighted to announce that we now have four new roles to fill -  amid unprecedented public interest in climate action!

Friends of the Earth is an environmental justice organization whose mission is to campaign for solutions to environmental problems that make life better for people.

We're recruiting an Administrator, a Campaign Communications Officer, a Donor Care & Fundraising Officer and a Finance Manager to join our team. Read on below for details on each individual position. To celebrate this special day we have a number of resources to share, including recordings of our gender justice webinars held last Friday.

We also want to share some photos from the Women’s Day rally held over the weekend! And we've got an important e-action opportunity you can take today. Read on for all the details… 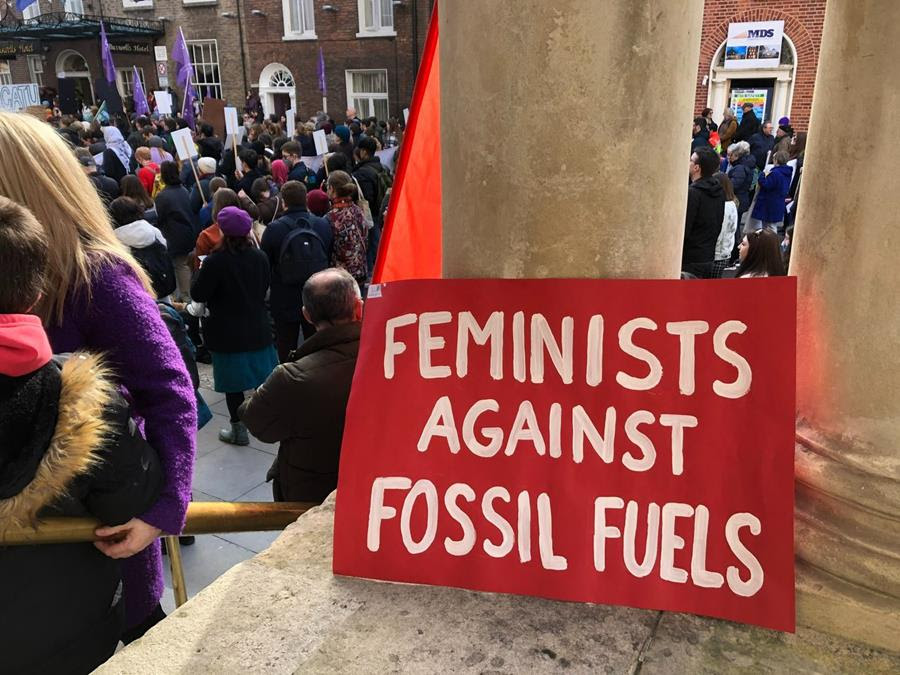 We'll jump to the e-action first. You might have heard the Tanáiste's comments last week - about using Russia’s horrific invasion of Ukraine as a wake up call to increase Ireland’s military spending.

81% of people in Ireland think the EU should consider boycotting Russian gas as part of the sanctions to oppose Putin’s invasion of Ukraine, according to an opinion poll carried out by Ireland Thinks for Friends of the Earth. Asked what the EU should prioritise to replace Russian gas, a majority (61%) of respondents said develop more renewable energy compared to only a small minority who supported building LNG terminals in Ireland to import gas by ship.

The poll was among a representative sample of the Irish population on Friday March 4th with a sample size of 1,011 and therefore margin of error of +/- 3%. Full details of the poll are online here [1].

Schools shouldn't have to struggle to put solar panels on their roofs. There's been huge delays with updating regulations to make it easier for schools to install solar panels. Take our e-action to email your Fianna Fáil TDs about this issue.

The next two sessions of our Learning Hub series will focus on our Power to the People work area. We’ll explore the increasingly pressing issues of energy poverty and retrofitting.

A recent report co-authored by Friends of the Earth Europe found that for every 1% increase in energy efficiency targets, 7 million people can be lifted out of energy poverty.

To explore this - and more - we’re delighted to be joined by Issy Petrie, research and policy officer with St Vincent de Paul, Bulelani Mfaco from the Movement of Asylum Seekers in Ireland and Bryce Goodall of Living Rent, Scotland. They’ll explore how high energy costs negatively impact us and look at how solutions to energy poverty can empower people and help address the climate crisis.

Friends of the Earth Ireland Statement on Ukraine This week the people of Ukraine have experienced a devastating attack on their freedom.
Friends of the Earth Ireland stands in solidarity with the people of Ukraine - and all who are opposing this terrible war. Along with our colleagues in Friends of the Earth International, we want to express our solidarity with all who have been impacted or forced to flee for their lives - as well as those who have been forced to witness atrocities in the place they call home.

War and conflict has devastating impacts for people and the planet. Yesterday’s IPCC report on the impacts of climate change [note 1] shows the science is clear: we are running out of time to secure a liveable planet for humans and nature.

The report calls for urgent action to respond to accelerating climate risks, and presents adaptation solutions with a focus on cities and climate resilient development. It paints a stark picture of a world in climate breakdown. The following three points from the report are particularly concerning: